The permanent exhibition of the State Solvychegodsk museum of art and history is located within ancient walls of the Annunciation Cathedral. Founded in 1560 by Anika Stroganov, it initially served as a house church of the Stroganov family, one of the most prominent Russian dynasties of merchants, industry leaders and patrons of art. Currently, the cathedral is undoubtedly the hallmark of the city. The upper temple is a rare example of church interiors of the 16th-17th centuries, which have remained intact to this day.

Some of the museum's exhibits are on display in the southern aisle. The main exhibition created and implemented by the KMVI team occupies the basement rooms of the cathedral and the lower church. It shows the products of some famous workshops of various trades and crafts, which flourished under the patronage of the Stroganov family: gold embroidery, icon painting, silverware, and jewelry. Among all the interesting examples of arts and crafts the most notable pieces are of religious background, which was typical for

medieval Russia with its strong orthodox context: there are some precious icons cases, crosses, censers, candlesticks, and other church utensils. The shape and color scheme of the showcases correspond with the minimalist, ascetic nature of the architecture and the interiors. It also matches the original idea of the lower temple construction which takes after the cave temples of the first Christians. The concept of the spiritual space is supported by the arrangement of hanging icons, museum lighting and other means of artistic expression 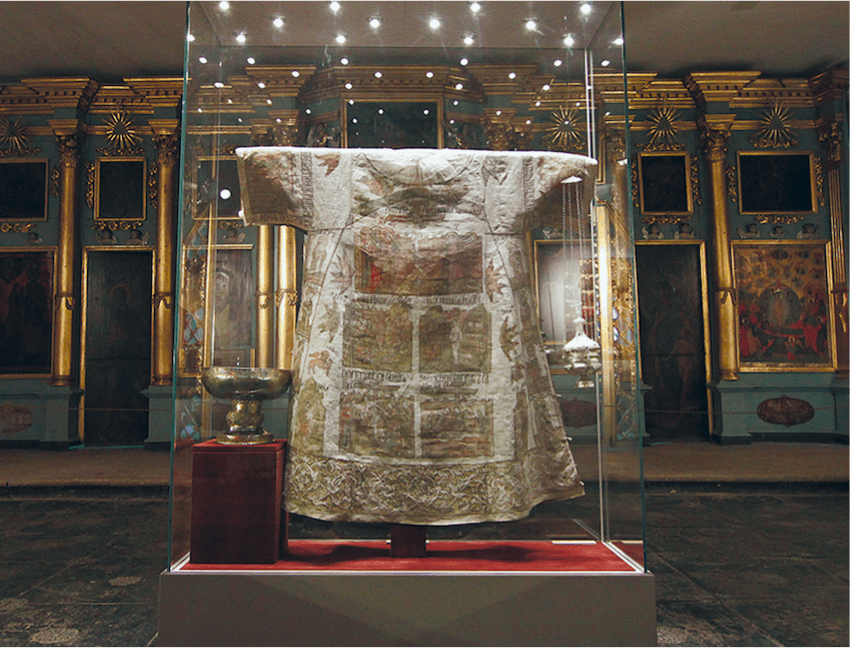 The tranquil rhythm of architectural lines and color solutions of the museum-temple interiors only helps to emphasize the expressive clarity and color saturation of the exhibits themselves. It makes us remember how the art schools were formed in the harsh conditions of the northern climate, how in the very aesthetic nature of their work lies the desire to add some color and brilliance to the bleak natural palette. The showcase with a bishop's vestments, is meant not only to emphasize the artistic value and historical significance of the exhibits presented, but also to reflect the context of their use, and how the orthodox religious beliefs were omnipresent in everything that was created back in the day 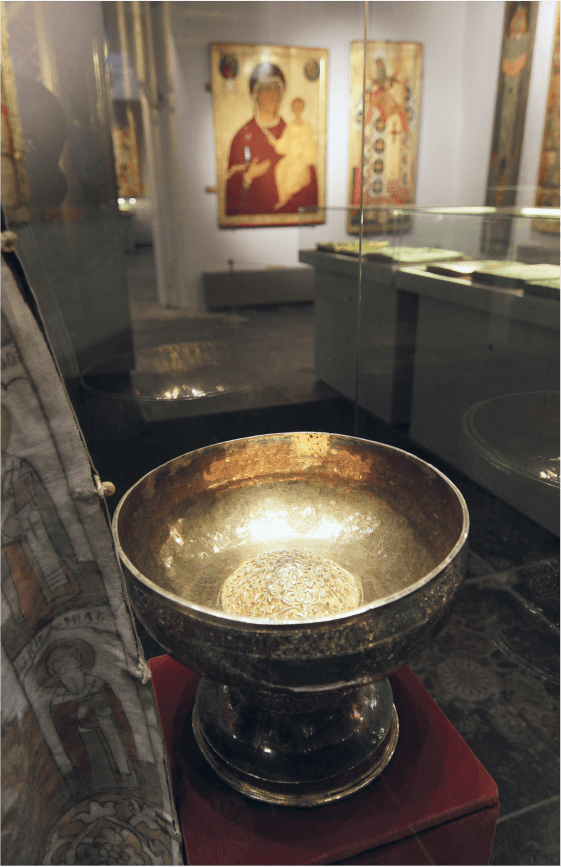 Icons of the Stroganov painting school that flourished in the 16th-17th centuries demonstrate their characteristic features that had a great impact on the further development of religious painting of Moscow, Volga region, and Russian North. Notable among such features is the way the artists introduced some complicated landscape elements into the icon-painting plots, interpreting them in a decorative way

3
Connecting to the past 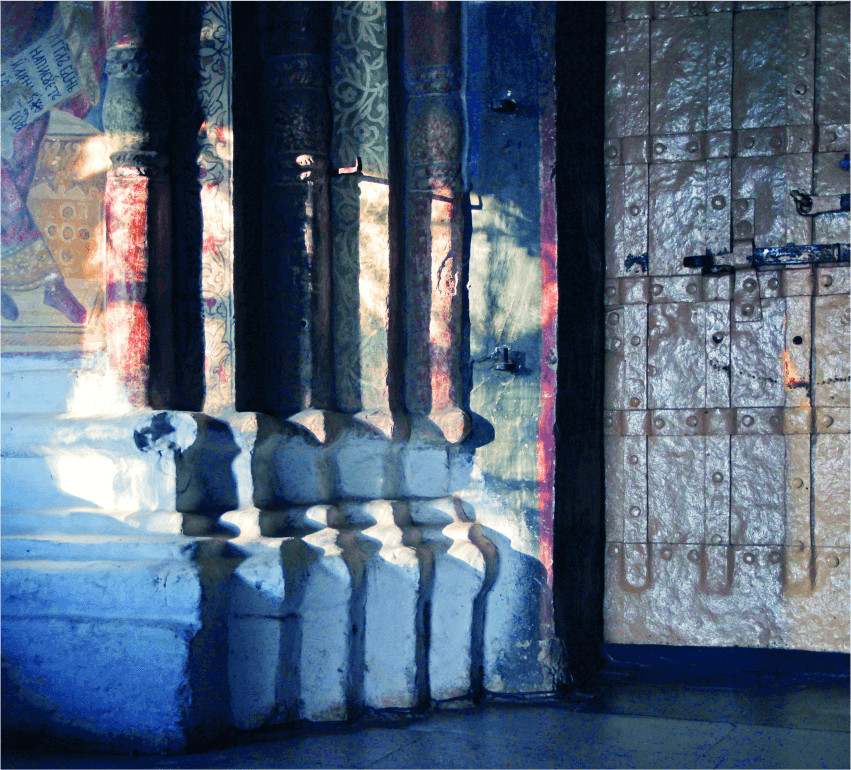 3
Connecting to the past

A relatively small exhibition placed inside a cathedral in the northern city of Arkhangelsk, made with low-key museum techniques reveals the significance of the place itself and makes the exhibit range seem even richer semantically and artistically. The former house church of the Stroganov clan nowadays puts on display the heritage of icon painters and various artisans who carried on developing arts and crafts traditions that originate from the ancient Novgorod republic. Solvychegodsk and adjacent lands proved to be a figuratively fertile ground for the craftsmanship thanks to support of the famous dynasty. The historical and cultural message of the place is emphasized by means of museum lighting, which encourages concentration and reflection, the calm dynamics of repeated shapes and volumes of the showcases, and logical correlation between the parts of the narrative

An important exhibition task was to highlight the original beauty of the old church interiors: the stonemasonry of the floor and podiums, decorative and structural elements of the altar barrier. A cruciform architectural composition was built near the former altar with floor coverings and exhibition blocks that accentuate the ends of the cross. Vertical rhythm comes from the showcases and icons placed on the walls. The clear and concise visual solutions, transparent showcase complexes, and the lighting – everything works to emphasize the importance of the exhibits and the architecture of the halls. Dark red color of the showcase podiums makes the gilded silver of the exhibits shine even brighter 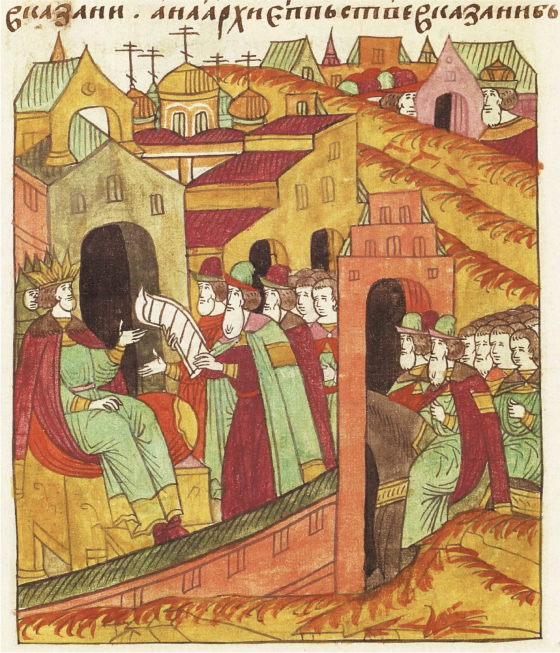 Miniature from the Illustrated Chronicle of Ivan the Terrible
(1560 – 1570)