The second stage of the Mariinsky Theatre was opened in 2013 in a new building on the Kryukov Canal, next to the historical one. Mariinsky-II is a new page in the two hundred years of history of one of the greatest Russian theatres. It happens to be one of the best-equipped theater and concert venues in the world, with an auditorium that can accommodate up to 2,000 people. An important visual component of the building is the foyer, its walls decorated with onyx. That three-story foyer space in the opening year of the new stage was used for an exhibition dedicated to the history of the theatre, the events and names that were globally recognized. The Museums and Exhibitions Manufactory team carried out both the project and the implementation. The main exhibits on display were stage costumes from various periods of 19th, 20th and 21st centuries.

The most important task for the artists of the exhibition had been to give inspiration to the modern theater interiors and create an atmosphere of theatrical illusions as well as a sense of a spectacle going on. Two floors were equipped with showcase niches, which held installations related to the theme “The image of St. Petersburg in the performances of the Mariinsky Theater”. A lot of unique artefacts were used to create sophisticated scenes, made according to the laws of theatrical effects. The easily recognized stage curtain designed by Golovin, which is one of the symbols of the Mariinsky, was reflected in many images.

One of the main sections of the exhibition was focused on the spectacles that had premiered on the stage of the Mariinsky Theatre, including six operas: “A Life for the Tsar” aka “Ivan Susanin” (1836), “Ruslan and Lyudmila” (1842), “Boris Godunov” (1874), “Prince Igor" (1890), “The Queen of Spades” (1890), “The Tale of the Invisible City of Kitezh and the Maiden Fevronia” (1907), and three ballets: “The Sleeping Beauty” (1890), “The Nutcracker” (1892), and “Raymonda” (1898). Among other thematic highlights of the exhibition were the works of outstanding theater artists and celebrities on the stage of the Mariinsky Theatre 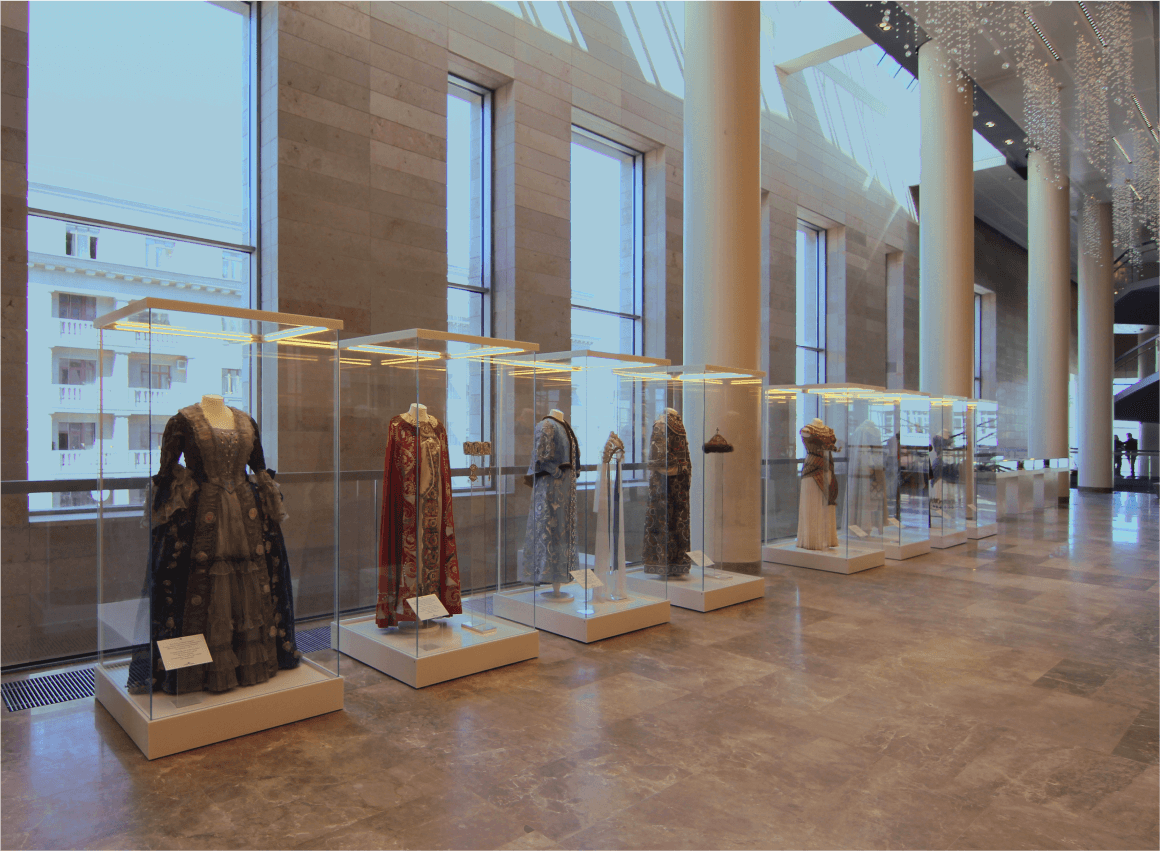 1
Exhibiting in a public space

The artistic solution of the exhibition was meant to match the interiors. The showcases were located against the background of the walls of the foyer. Their onyx finishing, with its color enriched by the special lighting, added both brightness and ambiguity to the overall artistic image. That golden-amber color seen through the transparent showcases was perceived as a backdrop for the exhibits. The brass frame of the showcases agreed harmoniously in color with the “emperor” marble that covers the floors of the foyer, and with the beige “jurassic” marble components used in the interior design. Milky-white podiums served as an ideal base for creating thematic compositions that reflected the atmosphere of the theater 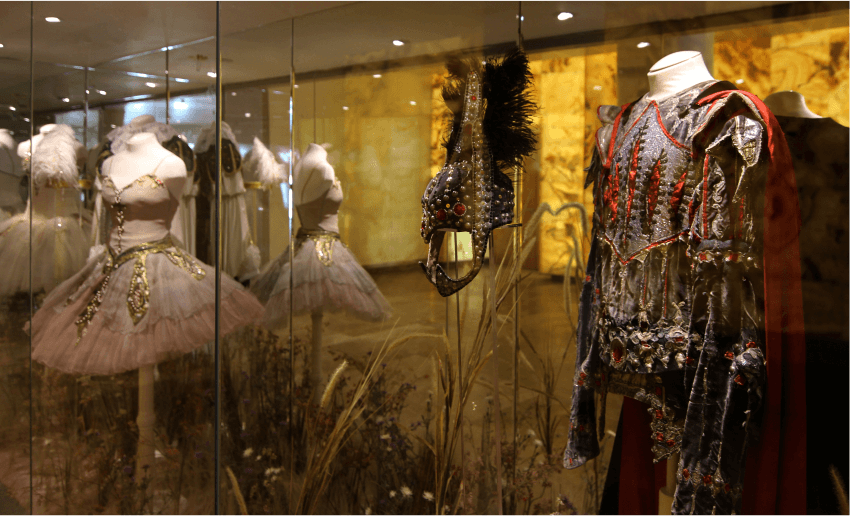 The main idea of the exhibition was to revive in shape and color the images and characters of different plays and spectacles that normally only exist during the stage performances, and also to display thematic materials from the museum funds of the theatre. Creating visual images through scenery, costumes, lighting and staging techniques made it possible to depict fragments of various productions in their artistic uniqueness 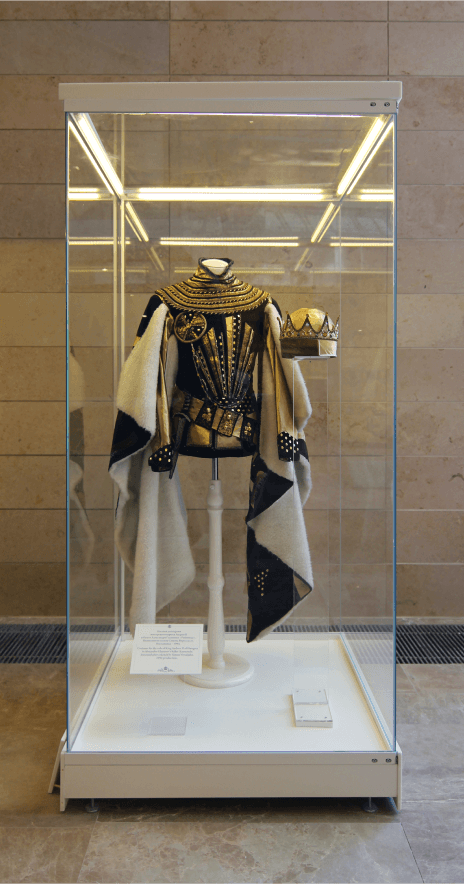 3
Integration into the public space
All the showcases formed an exhibition structure that was seamlessly integrated into the space of the foyer. Playing along the architectural logic of the interior made it possible for the exhibits to be perceived as a part of the overall visual impression 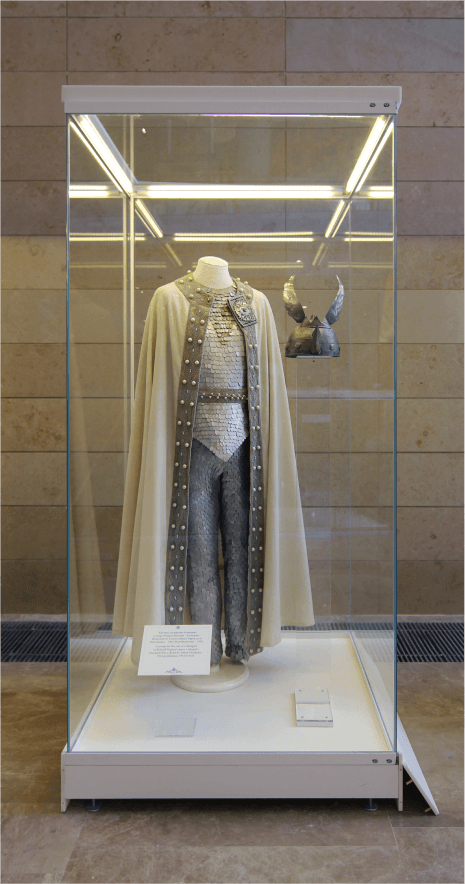 4
Minimalist artistic solutions
Using transparent showcases and white color allowed to accentuate the unique selection of objects, to emphasize for the viewers their historical significance and artistic value 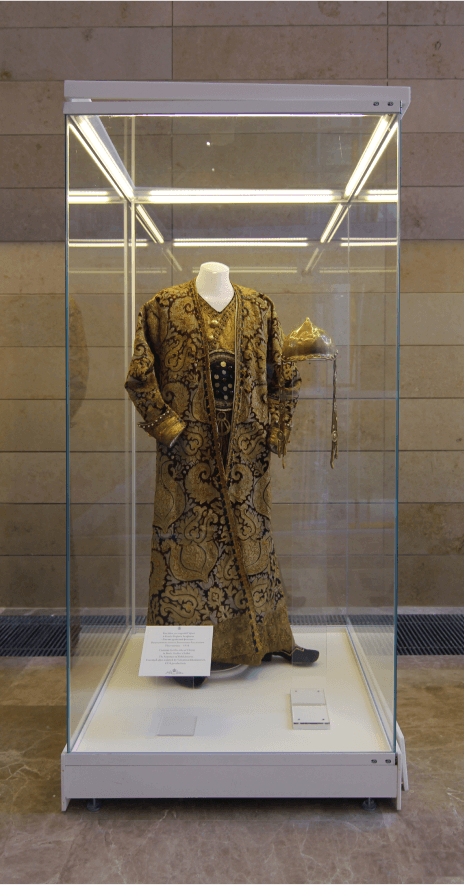 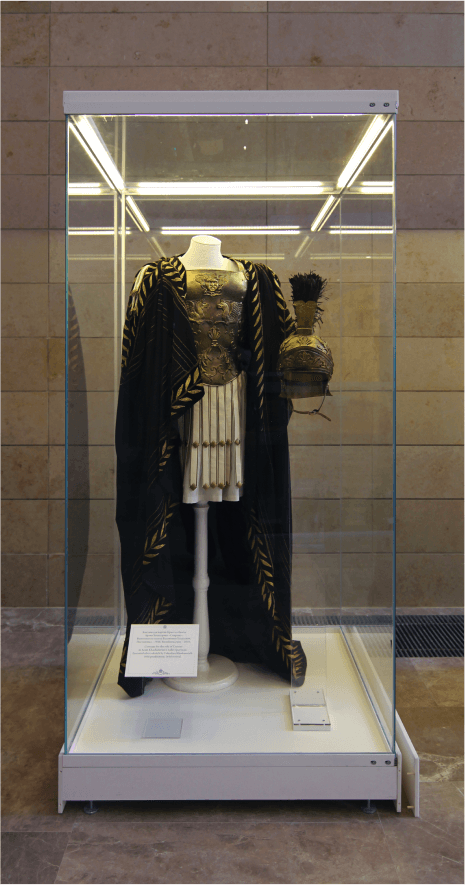 6
Delicate graphic solutions
All the labels and the annotation text blocks were extremely concise. That helped preserve the purity of images without compromising the perception of information. To add some character, classical decorative elements were used in the information blocks
+7 (812) 570-00-97office@km-vi.ru 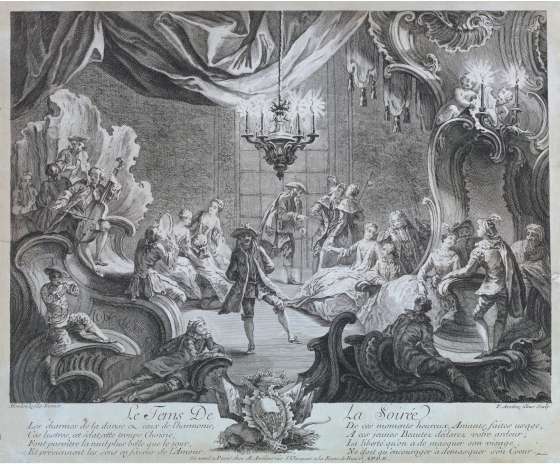