“Battle on the Home front
for the Great Victory” museum

Curator and author of the scientific concept:
N.I. Ovcharova

The museum exhibition “Battle on the Home front for the Great Victory” was opened in 2020, timed to the 75th anniversary of the WWII ending. It is the third part in the series of exhibitions made by Museums and Exhibitions Manufactory (KMVI) team for the museum-reserve “Prokhorovskoe field”. The core concept is to show all the extraordinary work and struggle performed on the home front by the workers and the Soviet civilian population in general during what is called the Great Patriotic War. All the exhibition elements are incorporated into one of the three architectural and artistic contexts: “Staged scene”, “Museum Integration”, “Ashes of War”. Their combination allows to create a deep, integral image without compromising the exhibition’s main ideas.

The narration unfolds on two floors and includes 14 themed halls with smooth artistic transitions and meaningful space architecture, all following the general scenario. The exhibition features 30 staged scenes, 55 showcases, 35 interactive zones, more than 180 models and layouts, a large-scale information and graphic complex, large installations, and a unified navigation system. Each museum hall is dedicated to a certain specific topic, and the logic of the visitor's movement along the route corresponds to the chronology of events and the interrelation of semantic blocks.

The concept of the first hall “Premonition of War” means to show two different worlds colliding, the USSR and Nazi Germany, the latter presented in a complex of showcases and projection screens creating an image of a cold military machine looming over peaceful Soviet everyday life. The desired effect of sharp contrast between the two parties is enhanced by the complexion of architectural elements, the warm and cold artistic lighting and the range of objects presented. In this hall the viewer starts following symbolic stories of Soviet families, their fate being reflected in other scenes of the exhibition 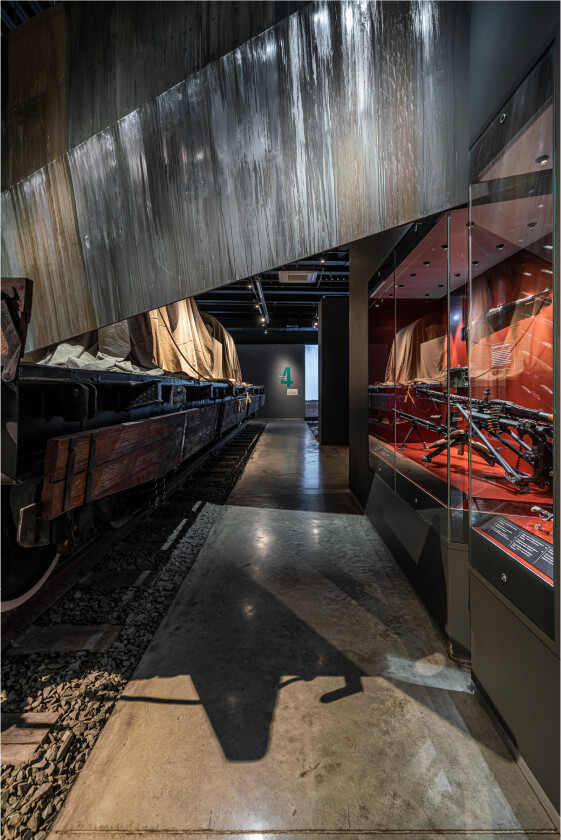 The key element of the exhibition’s visual image is a large-scale, 24-meter-long architectural installation “Knife of War”. Slashing its way through several halls, the knife literally cuts in half objects and bits of architecture. In the “Premonition of War” hall it separates peacetime and wartime with a cold, steel wall. Its stamp resembles characteristic German bayonet knives which gives a key to understanding the nature of that object. Cutting off peacetime from wartime, the knife changes the fate of people, separating families, destroying cities, forcing people to leave their homes and native land. Cutting through the wall in the hall representing evacuation, the knife symbolically divides the map of the country, resting against the ridge of the Ural Mountains, as a line between the battle front and the home front

lives into before and after 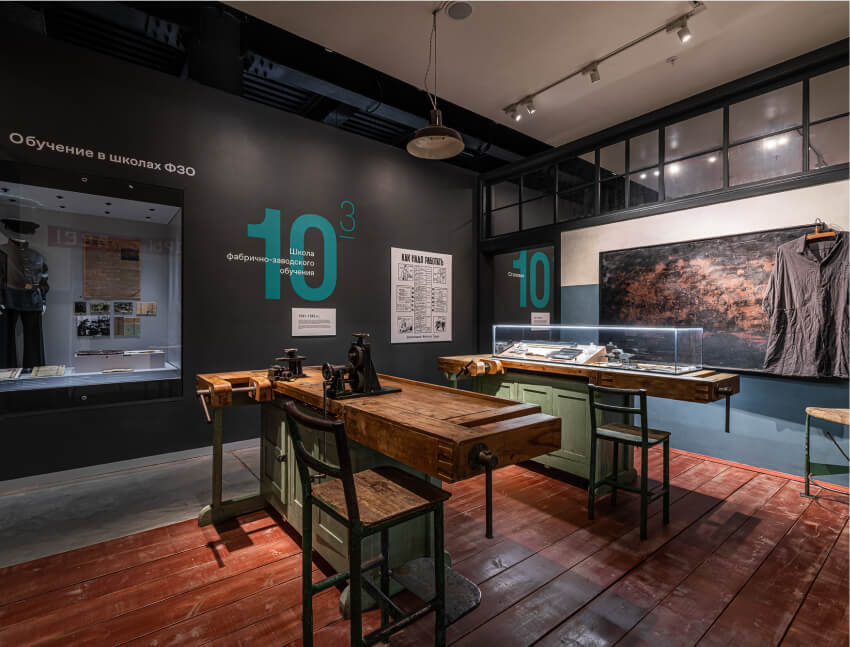 In order to preserve authenticity and integrity of the artistic image in the “Staged Scene” context, all the information and graphic materials related to the theme of the scene are placed in a separate context – “Museum Integration”. It has characteristic color-coded and graphic solutions and can also contain display units of various sizes, depending on the thematic exhibition plan. Thus, it is possible to effectively solve classical exhibition tasks without compromising historical scenography 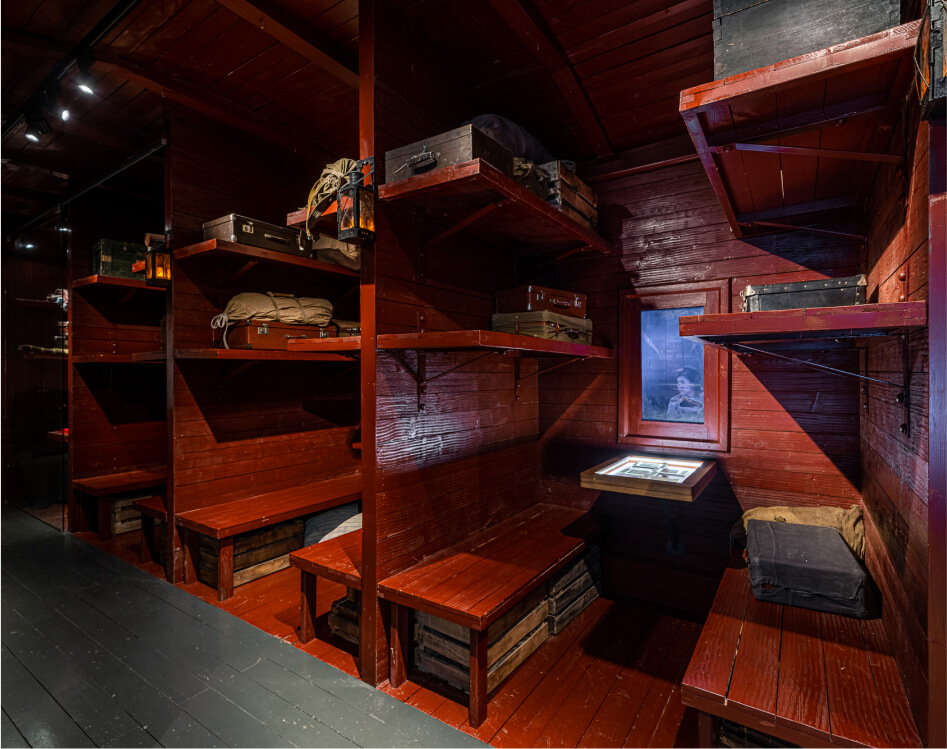 Staged scenes with multimedia elements make an important part of the exhibition. An excellent example is the evacuation railway car recreated in detail, equipped with multimedia complex. The visitor can try sitting on a bench there, seeing his/her reflection in the window of the carriage against the backdrop of moving landscape. At a certain moment, reflections of fellow travelers appear in the window, as if sitting opposite and beside him/her. Thus, an unforgettable effect of an invisible presence is created, and genuine stories of people who survived the evacuation are offered to the visitor’s attention. The scenes are completed with recreated objects and their stories.

The main symbol of the war

in the exhibition is the giant knife

and the way angular spaces are chopped 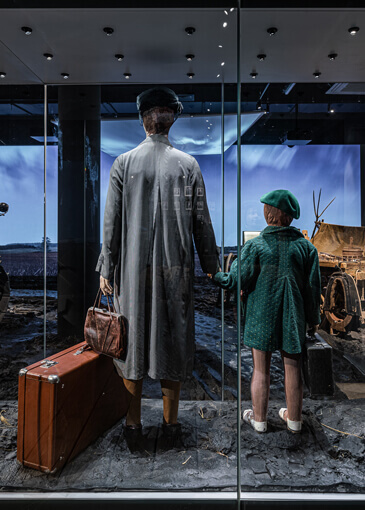 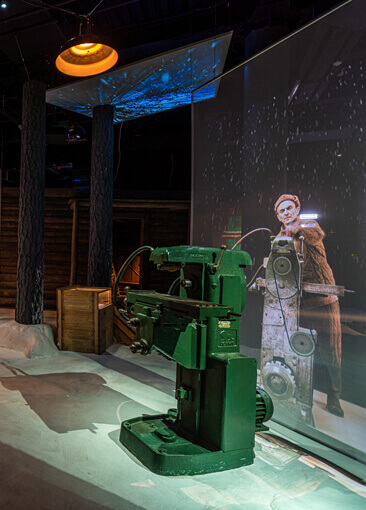 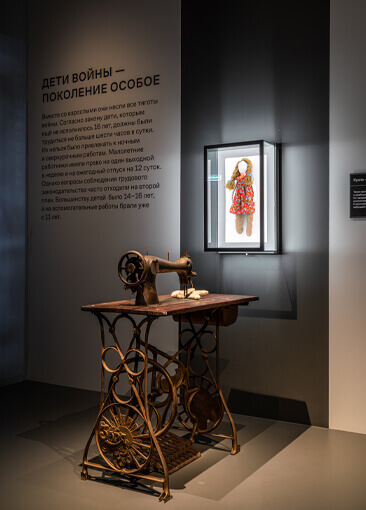 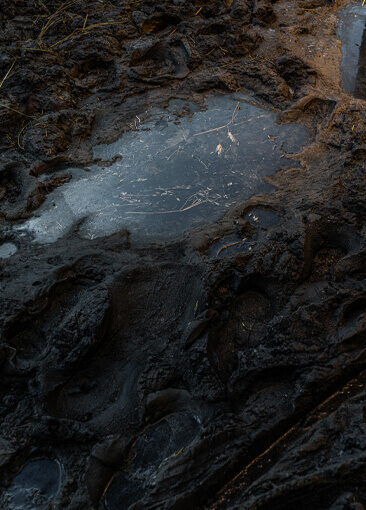 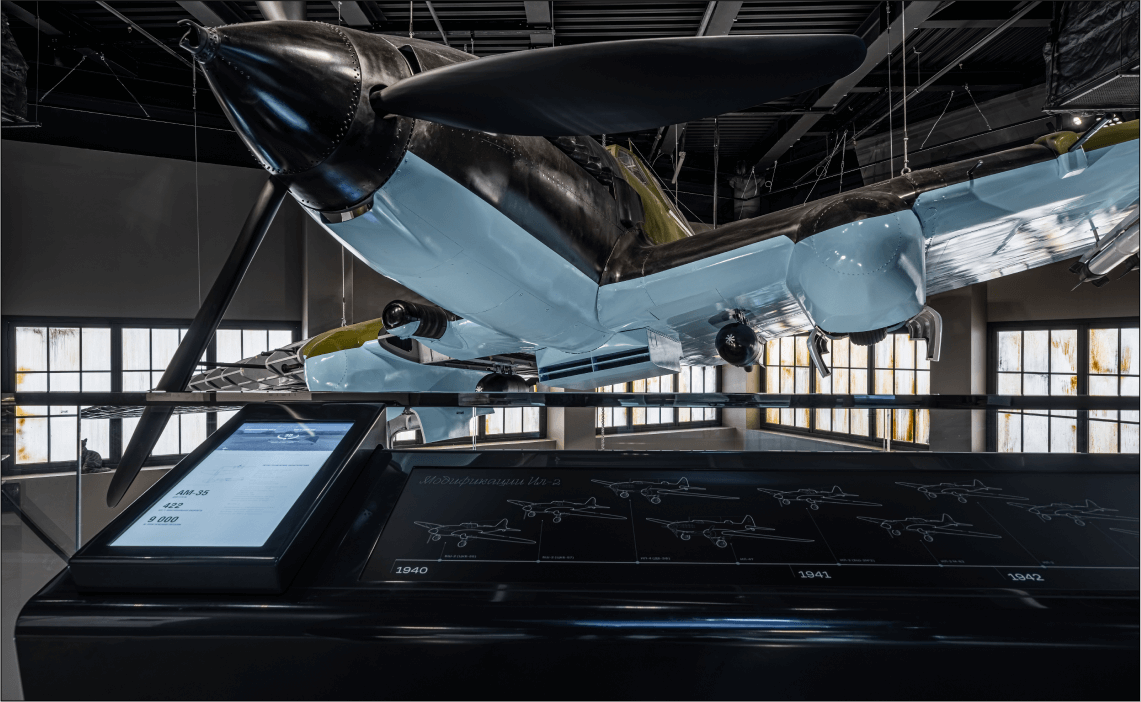 For a visitor to better picture the epoque, a great number of artifacts were recreated specifically for the exhibition. From small delicate objects like letters and photographic documents, to costumes and equipment, to fragments of steel shops and product samples, and finally even a monumental IL-2 with operating mechanisms and electronic control via touch screen

Due to large dimensions

and impressive weight of some

of the exhibits, they were installed during

9
Breaking through the space 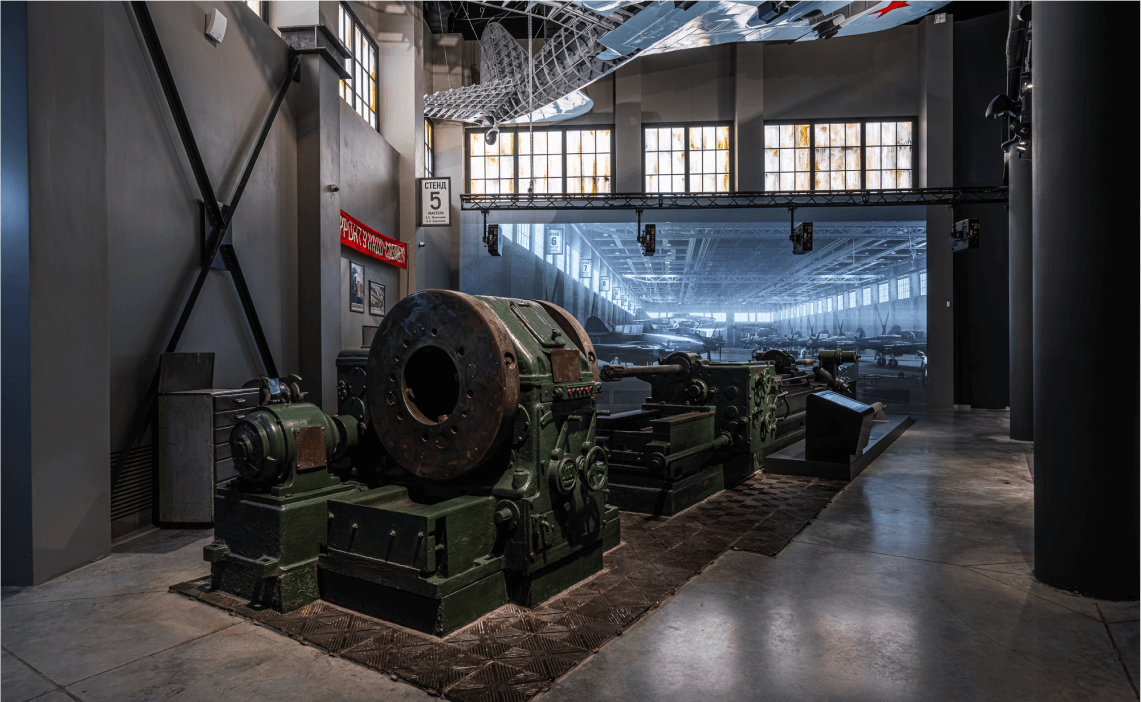 9
Breaking through the space

Despite the exhibition being relatively modest in size, in has a way of showing some large-scale industrial scenes, with the help of multimedia tools and artistic solutions. At the same time, the proximity of small chamber spaces only enhances the contrast and shows the difference in scale

Watching the projection perspective of an aircraft factory, a visitor can get an idea of the real size of the workshops and see people working to assemble a flying machine 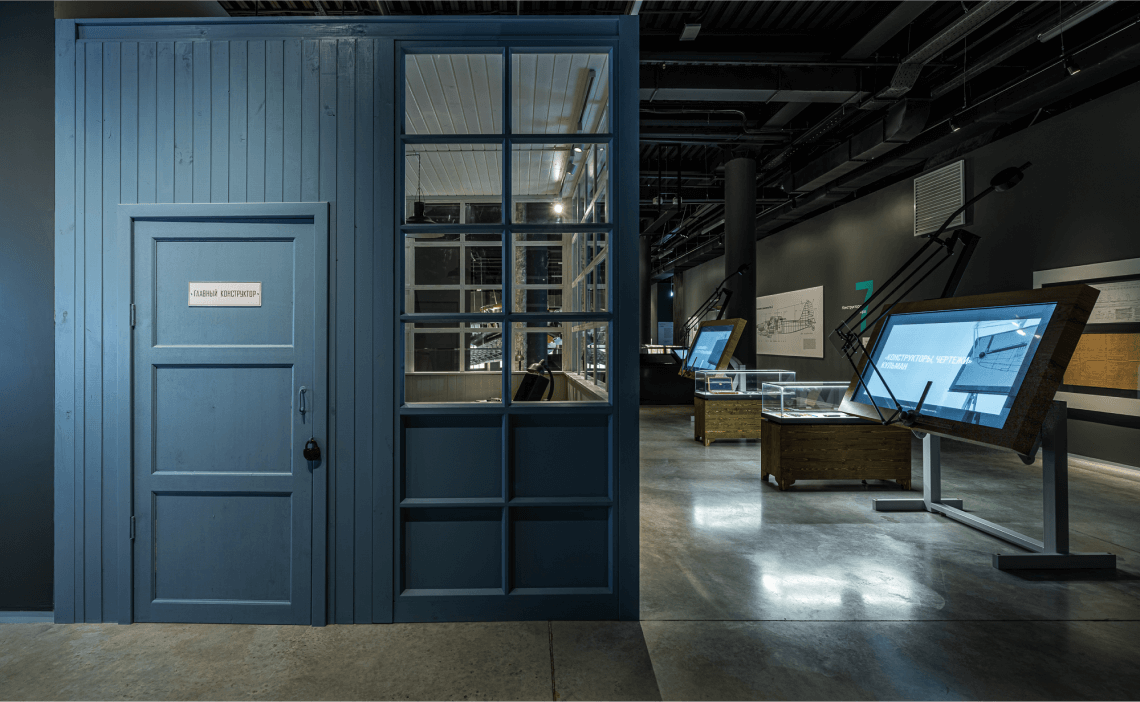 Many multimedia elements have an interactive component which provides a sense of involvement into the museum scenography, enriching viewers’ experience while they study the staged scenes. Interaction can serve as an information and reference system

For example, interacting with the drawing boards in the “Design Bureau” scene, a visitor can get additional information while immersed in the context 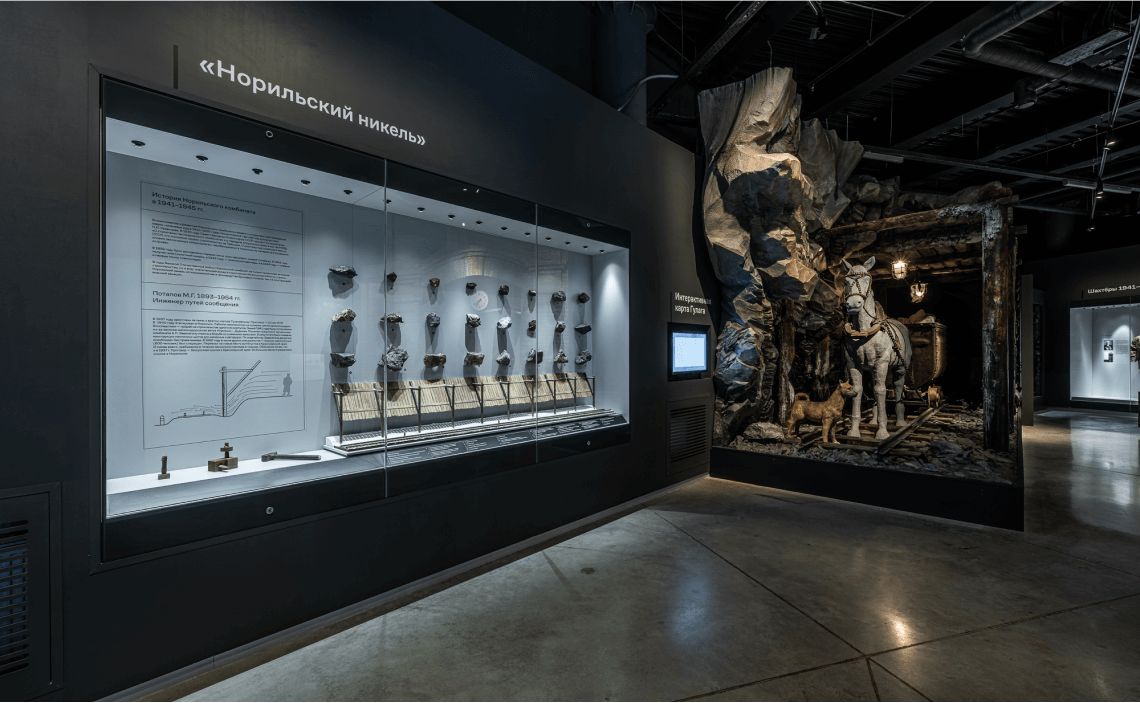 The exhibition includes a large-scale complex of 55 showcases. Each of those presents an artistic composition made with museum exhibits, has a numbering system with labels and may contain additional graphic elements, explications, photographs, diagrams, and infographics

If necessary, the showcase is complemented by additional information and references that allow to elaborate on a certain topic and present documentary chronicles and photographic materials 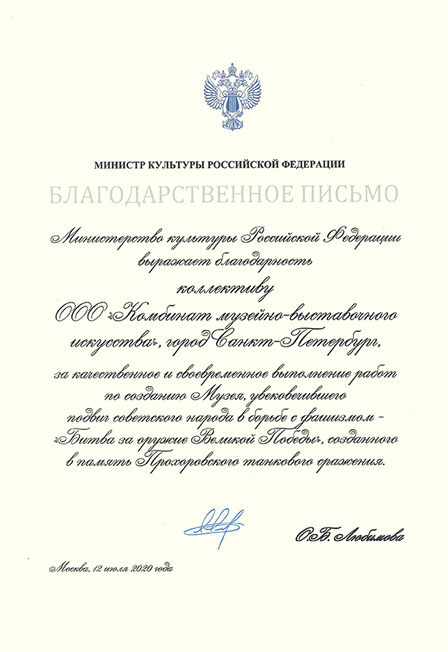