The concept of the
museum

Curator and author of the scientific concept
N.I. Ovcharova

The museum "The Third Battlefield of Russia", part of the museum-reserve “Prokhorovskoe field” was designed and implemented in 2009-2013. The first floor is dedicated to the Great Patriotic War of 1941-1945 and particularly to the largest tank battle in world history that took place nearby and is known as the battle of Kursk. On the second floor, ethnographic and local history artefacts are presented,

as well as an exhibition block dedicated to the two other famous Russian battlefields: Kulikovo (fighting Mongol khans) and Borodino (war against the Napoleon). The museum compound also houses a multifunctional exhibition hall, a cinema and lecture hall and an educational center. It was the first project designed and implemented by KMVI team for the museum-reserve “Prokhorovskoye field”. Nowadays there are three museums there, part of the same complex, built and renovated by KMVI over a number of years.

The general stylistic appearance is defined by the architectural lines and consistent colors. Multimedia and kinetic installations like the “War Machine” panel and moving metallic ceilings make the accents and add dynamic, and the showcase blocks form thoughtful thematic compositions

“War machine” is one of the most notable objects on the museum's tour route. It’s a kinetic sculptural panel created by an outstanding Russian artist and stage designer Viktor Grigoriev. That expressive art object personifies the war machine that grinds and twists human destinies. The mechanics of the object is interconnected with the lighting, projection, and acoustic systems of the hall. Authentic samples and elements of the firearms from the times of the WWII were used to create the sculpture. Grinding sound of the moving elements creates an unsettling and tense atmosphere in the museum hall 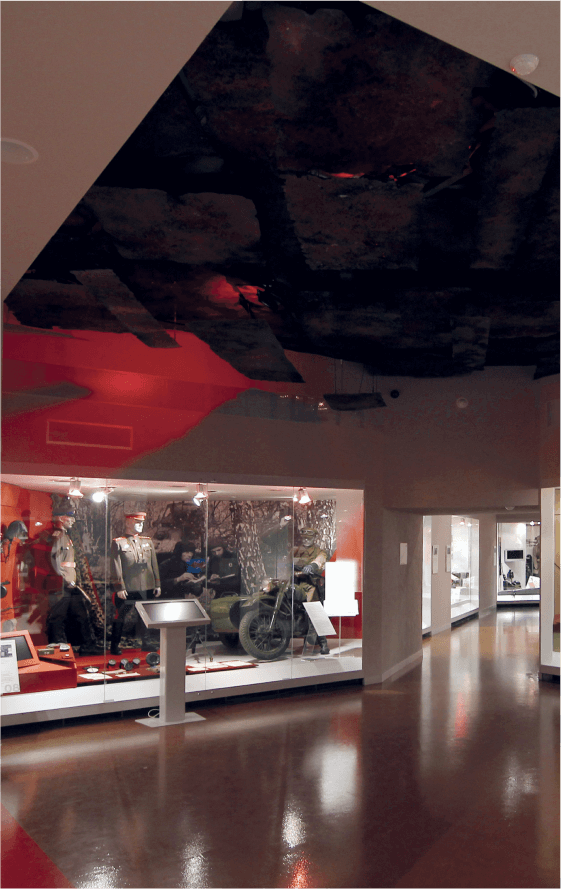 Rusty kinetic ceilings spread over the exhibition halls are another work of Viktor Grigoriev and the KMVI art team. Smooth yet ponderous movement of metal sheets follows a given scenario and is carried out by a one-of-a-kind system of motors and cable suspension systems. There is no way of escaping those moving metal clouds, and that transmits internal tension compatible with the context of the general theme of the museum. Showcases, sound accompaniment and kinetic scenography – altogether they create a feeling of both fragility and value of every human life 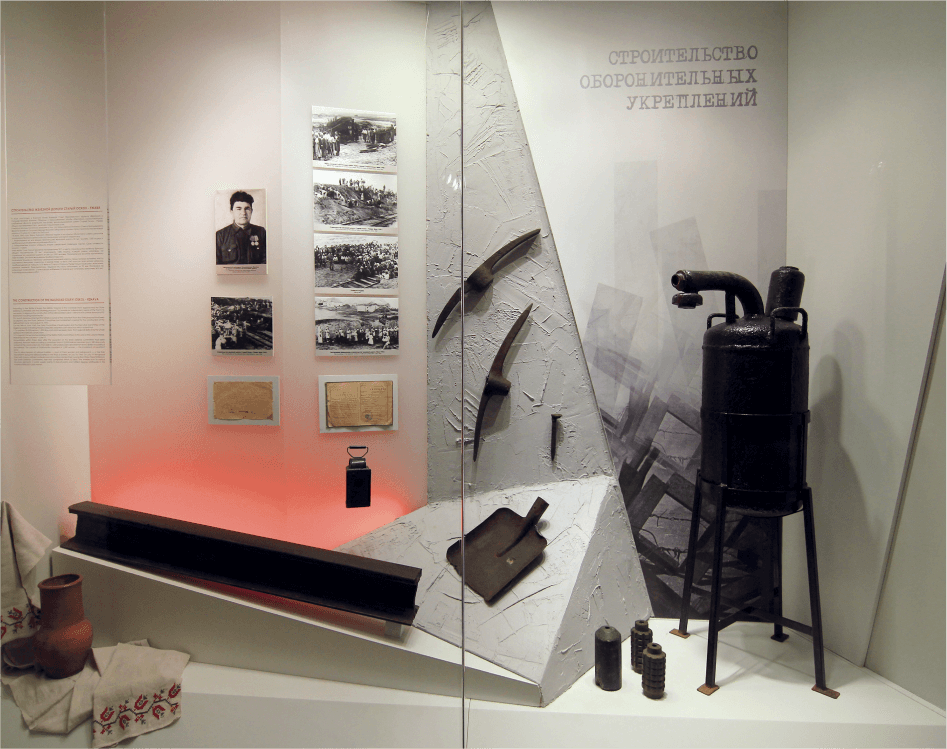 The simplicity of architectural lines interspersed with decorative installation elements and dramatic lighting focused on thematic narration – all help to have a clear and comprehensible perception of historical material and be immersed in the atmosphere on the heroic and tragic events.

Internal space of the museum is organized to follow the chronological timeline, but the movement and the division is subtle and is defined with the flow and symbolic imagery of architectural shapes and well-planned interior volumes. 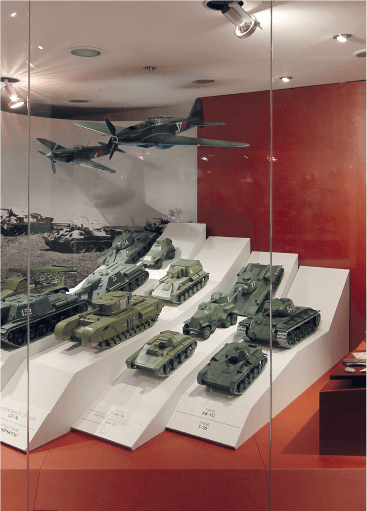 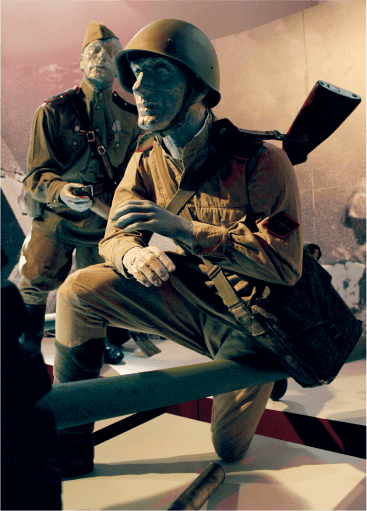 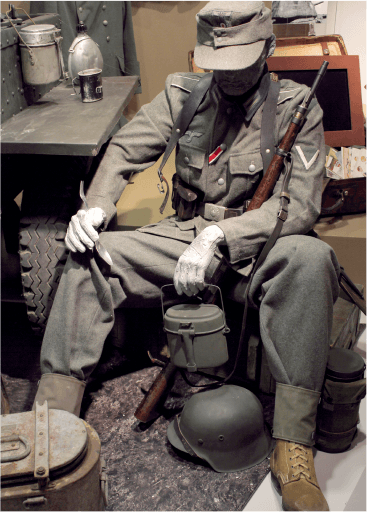 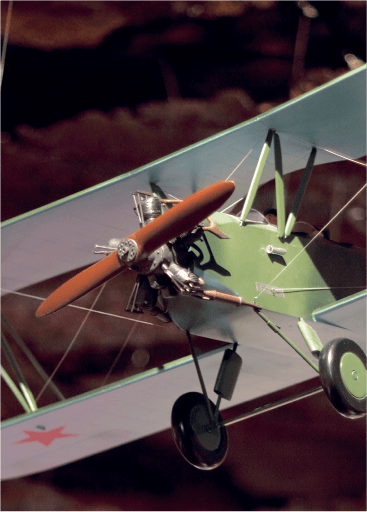 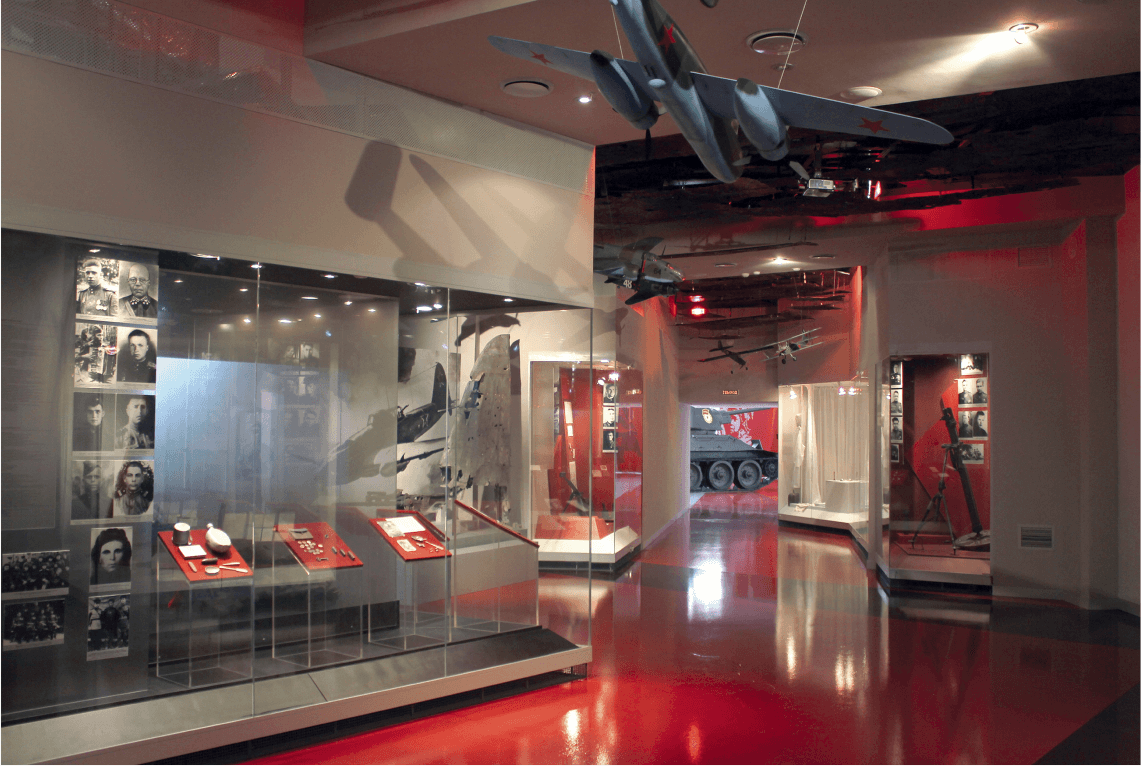 Distinct color schemes give each museum hall its own character, while some recurring elements enhance the impact of color and set a spatial rhythm, they permeate the interiors of the museum, linking all architectural forms and images into a single composition 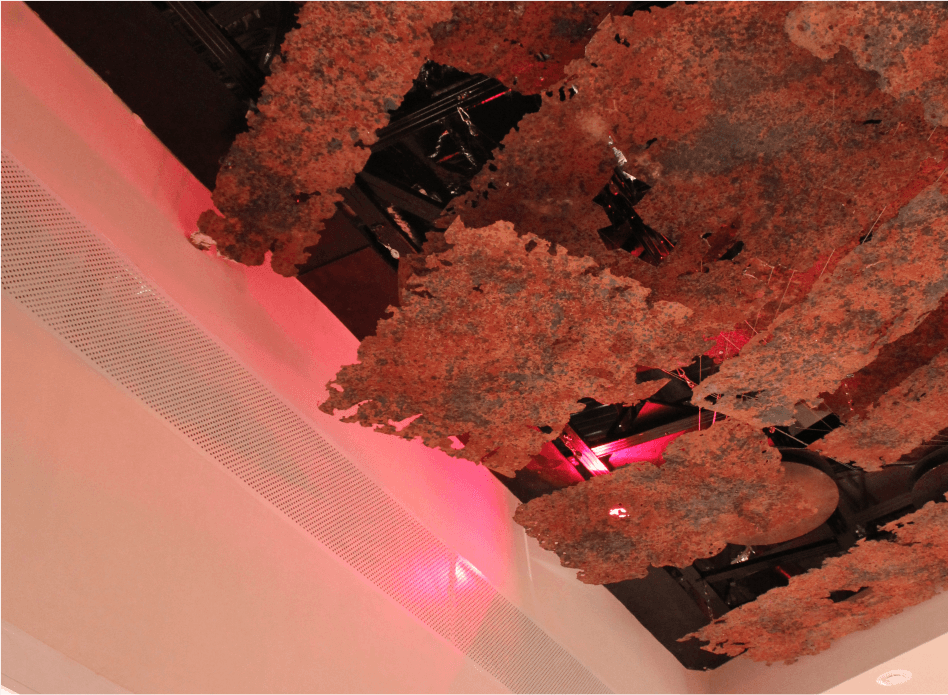 The museum is equipped with an automated control system for the exhibition and the entire compound in general. It allows creating a unique lighting and multimedia environment for each exhibition block. It contributes to the general scenario and the rhythm of the narration, to help better percept all the material and also to preserve artistic, historical and scientific integrity of the narration

"For contribution to culture." FGBUK Museum-Reserve "The Third Military field of Russia"

"For contribution to culture." FGBUK Museum-Reserve "The Third Military field of Russia" 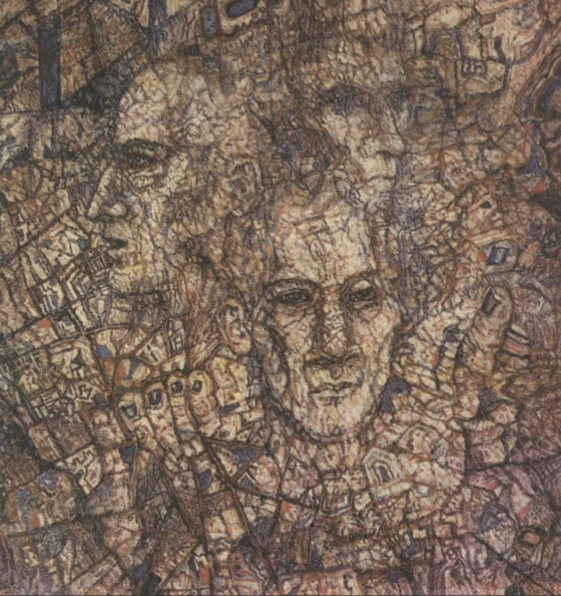